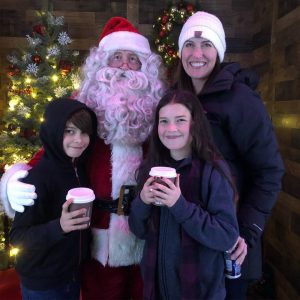 Santa heads back to the North Pole after December 23rd!

The History of Santa Claus and St. Nicholas

The modern Santa Claus that we know today grew out of traditions surrounding the historical St. Nicholas, a bishop who lived in the 3rd century in Myra (modern-day Turkey). He was known as the patron of children and magical gift-bringer after saving children from horrible situations on multiple occasions. His popularity spread over Europe, specifically in Germany, and later to the United States. Santa is now the popular face of Christmas, but people throughout the world still celebrate the legend and traditions of Nikolaustag, St. Nicholas Day on December 6th, which was the day of his death.

On the evening of December 5th in Germany, St. Nicholas visits homes to see if children are behaving. To prepare for the visit, rooms are cleaned, toys tidied, shoes are polished and set out by the door. The next morning, children wake to find them filled with chocolates and treats.

The name Krampus originates from the German word, krampen, which means claw. Tradition has it that he’s the son of the Norse god of the underworld, Hel. He tags along with St. Nicholas the night before St. Nicholas Day. December 5th is known as Krampusnacht, or Krampus Night. While St. Nicholas rewards children with sweets, Krampus swats “wicked” children and takes them away to his lair. Catch a glimpse of Krampus at the Silverton Christmas Market!